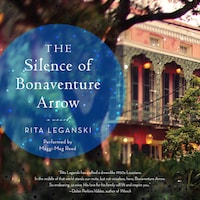 The Silence of Bonaventure Arrow

“Suffused with the mystical charm of New Orleans and the Louisiana bayou, Leganski’s lyrical debut novel conjures dreams of voodoo, the power of healing, and the distinction between hearing and listening. This extraordinary, evocative novel will cast a spell over fans of magical realism in the vein of Alice Hoffman, Kaye Gibbons, and Sarah Addison Allen. Simply enchanting.” — Library Journal (starred review)

A magical debut novel from Rita Leganski, The Silence of Bonaventure Arrow is the tale of a mute boy whose gift of wondrous hearing reveals family secrets and forgotten voodoo lore, and exposes a murder that threatens the souls of those who love him.

Bonaventure Arrow didn’t make a peep when he was born, and the doctor nearly took him for dead. But he was listening, placing sound inside quiet and gaining his bearings. By the time he turns five, he can hear flowers grow, a thousand shades of blue, and the miniature tempests that rage inside raindrops. He also hears the voice of his dead father, William Arrow, mysteriously murdered by a man known only as the Wanderer.

Exploring family relics, he opens doors to the past and finds the key to a web of secrets that both hold his family together, and threaten to tear them apart.

Set against the backdrop of 1950s New Orleans, The Silence of Bonaventure Arrow is a magical story about the lost art of listening and a wondrous little boy who brings healing to the souls of all who love him.