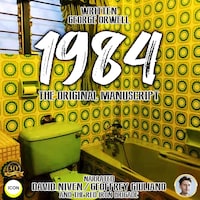 4h 59m
NarratorDavid NivenGeoffrey Giuliano And The Red Iron Brigade
TypeAudiobook
Categories
NovelsNovelsClassic NovelsClassicsClassics
Share this book
“Who controls the past controls the future”
.
“War is peace”
“The best books... are those that tell you what you know already.”
“If you want to keep a secret, you must also hide it from yourself.”
“If you want a picture of the future, imagine a boot stamping on a human face—forever”
George Orwell, was an English novelist, essayist, journalist, and critic. His work is characterized by lucid prose, biting social criticism, opposition to totalitarianism, and outspoken support of democratic socialism.
Orwell's work remains influential in popular and political culture, and the adjective ”Orwellian”—describing totalitarian and authoritarian social practices—is part of the English language, like many of his neologisms, such as ”Big Brother”, ”Thought Police”, ”Two Minutes Hate”, ”Room 101”, ”memory hole”, ”Newspeak”, ”doublethink”, ”proles”, ”unperson”, and ”thoughtcrime”, as well as providing direct inspiration for the neologism ”groupthink”.
1984 centers on the consequences of totalitarianism, mass surveillance, and repressive regimentation of persons and behaviors within society. Orwell modeled the totalitarian government in the novel after Stalinist Russia. More broadly, the novel examines the role of truth and facts within politics and the ways in which they are manipulated.
The story takes place in an imagined future, the year 1984 when much of the world has fallen victim to perpetual war, omnipresent government surveillance, historical negationism, and propaganda. Great Britain, known as Airstrip One, has become a province of a totalitarian superstate named Oceania that is ruled by the Party who employ the Thought Police to persecute individuality and independent thinking.[5] Big Brother, the leader of the Party, enjoys an intense cult of personality despite the fact that he may not even exist. The protagonist, Winston Smith, is a diligent and skillful rank-and-file worker and Outer Party member