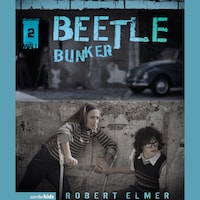 Middle-school students ages 8-12 can experience a story of action and adventure in Beetle Bunker, book 2 in the Wall Trilogy series which presents historically accurate fiction that brings the past to life in a kid-friendly way. In 1961 East Berlin, Sabine discovers a forgotten underground bunker that could possibly take her family under the wall to West Berlin and freedom … if they can find a way to get her across.

Beetle Bunker is perfect for:

kids interested in stories about spies, mysteries, adventure, and friendshipproviding a fun and interesting series that helps students ages 8-12 understand history in a real and understandable wayhomeschool or school librariesback to school, birthdays, and holiday gifts

In Beetle Bunker, Sabine lives in 1960s East Berlin, where neighbors spy on each other, books are forbidden, and people sometimes disappear in the middle of the night … to the west side of the Berlin Wall. When Sabine discovers a forgotten underground bunker, she first uses it to escape her crowded home and comments on her physical disability, then thinks of a new use for the bunker. Could it take her family under the wall to freedom?

If you enjoyed Beetle Bunker, be sure to check out the other books in the Wall Trilogy for the entire story: Candy Bombers and Smuggler’s Treasure