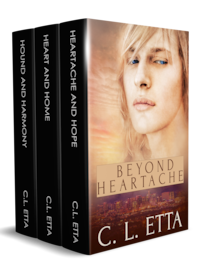 Beyond Heartache: A Box Set

At eighteen, Kevin Monroe has learned that mothers don’t always love their sons, Dad’s fists can break your bones and a closet gets mighty crowded with two. After the boy next door breaks his trust and his heart, Kevin departs Albuquerque, New Mexico, determined to live his life out and proud as the man he is meant to be. With Diamondback tickets in his pocket, Kevin leaves his heartache behind to pursue his long-time hope of entertaining as a drag queen.

Fear has ruled Raphael Delgado since he first realized he was gay—fear of discovery, fear that he can’t support his disabled mama and fear that he has lost Kevin forever. Against a backdrop of familial love and obligation, Raphael struggles to find the courage to accept his sexuality, while hoping to leave the fragile confines of his closeted life.

While watching a Diamondback game on television, Raphael spots Kevin kissing a man in the crowd. His first reaction is fear for Kevin’s safety and his second, fear that Kevin will never come home.

Can love be restored long distance? Will love’s key be strong enough to unlock Raphael’s closet door? And who is the red-haired beauty wrapped in Kevin’s arms?

For the past two years, Kevin Monroe has lived his dream, performing alongside his partner, Robbie McMaster, as noted Las Vegas drag queen Layona Beach.

Raphael Delgado’s love for Kevin made it easy to set aside his dream of becoming a teacher, to care for Mr. Monroe and his own disabled mama. Now Mr. Monroe is dying, and Kevin is coming home.

Raphael’s inadvertent refusal to publicly hold Kevin’s hand is the catalyst for a chain of events that answers these questions. Will Kevin go to gay inmate prison? Will Robbie end Layona Beach and Robbie Rhythm? How does Raphael become accidentally engaged?

Within its themes of family obligations, unrequited love and acceptance, Kevin, Robbie and Raphael discover that heart and home are synonymous.

He struggles with the stirrings of his heart.

The welcoming lights of Las Vegas dim when Kevin Monroe and his drag persona Layona Beach leave Robbie Rhythm. Deciding it’s time to face his past, Robin McMaster emerges from Robbie’s shadow, and sets his sights on Canada to reconcile with the mother who abandoned him. But first he travels to San Francisco, intending to mend his broken heart amid red-headed sluts and willing men.

A year after his partner of twenty years left him, retired Master Sergeant Cassidy O’Connor lives alone on his mountain. With his PTSD under control, he is content with his solitude. When a mutual acquaintance requests a favor, Cassidy agrees to covertly trail Robin. With instructions to keep Robin safe, Cassidy is unprepared for his attraction to the engaging young man. But Cassidy has a secret. So, he struggles with the stirrings of his heart for the young musician, over his loyalty to his former partner.

Will Robin allow himself to give his heart to the man called Hound? Can a gruff Master Sergeant find love with a fiery redhead whose past goes beyond heartache? Will the mysteries of their pasts permit a life of harmony?