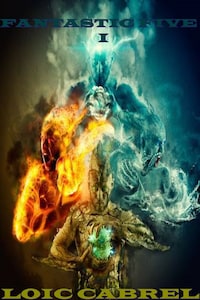 114 pages
TypeE-book
LanguageEnglish
Categories
Sci-fi & FantasyFantasy
Share this book
Fantastic Five I, a 30,000-word and 125 page superhero novel, is the story of five fantastic superheroes and superheroines as elementals who fight against the two supervillains Elementman and Sunman as the two attempt to exterminate all the homo sapiens and humans with the Selene (a moon), the Stellar (a star) and the Solar (a sun).

On Earth, the human world, lives a group of five fantastic superheroes and superheroines known as the Fantastic Five. The Fantastic Five are: Thunderboltman of the Lightning and Thunderbolt Element, the group leader, dressed in black armored battle costume, black mask, cape and black eye-glasses visor, and who floats on the skies with electricity pumping throughout his body. Airman of the Air and Wind Element dressed in white armored battle costume, white mask and cape and white eye-glasses visor, and a hoverer always above, flapping his vast and white feathered wings. Fireman of the Fire and Flame Element, brother of Airman, with armored battle costume in red color and mask, cape and eye-glasses visor all in red color, and hands flamed with fireballs, and a floater always above. Earthwoman of the Earth and Ground Element, dressed in green armored costume who manipulates the element of earth-grounds and also the stones, metals, woods, walls and all other passages, and her mask, eye-glasses visor and her cape are all in green colour, and always a slider and slipper. Waterwoman of the Water and Sea Element, the twin sister of Earthwoman, dressed in blue armored battle costume, and mask, cape and eyeglasses all of blue color, and always a scurrier and scuttler. They make, manufacture and manipulate the five elemental powers of earth's nature five elements (thunderbolt, air, fire, earth, and water), and are also called The Element Guardians. In this first book, they battle and brawl against and ill individual: Rexter, who makes and manufactures and manipulates an evil Elementman who has in him the five elemental powers, and also another evil Sunman, as the two try to destroy the planet Earth and the Fantastic Five.