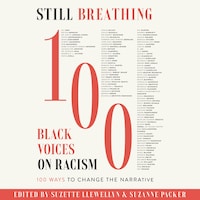 Includes an audiobook-exclusive interview with the project’s editors, Suzette Llewellyn and Suzanne Packer.

A timely book and a conversation starter on race in Britain.’ Rachel Edwards, Author of Darling and Lucky

‘A timely book in a year that has made clear that Britain still has a very long way to go towards becoming the model of racial equality it aims to be.’ Kenya Hunt

‘I'm so proud to hold this book in my hand. We are here in all our richness.’ Adjoa Andoh, Actor, Director

‘This book is such a moving read for everyone of all ages and races.’ Colin Jackson, CBE

‘A reinforcement of evocative truths that hurt and sting deeply but also empower tremendously.’ Sharon Duncan-Brewster

The whole world is watching.

25 May, 2020. George Floyd, a 46-year-old black man, is killed in Minneapolis while being arrested. His death, witnessed by horrified bystanders, is captured on camera – and within hours has spread far and wide across social media.

The protests that follow express shock, sorrow, and outrage. Because what’s happened, has happened before – away from witnesses and cameras. The story didn’t begin here, and this is not where it ends…

Touching on Windrush and the workplace, race riots and reforms, these essays seek to educate, to bear witness – and to offer hope for a better future, in Britain and around the world.

Visual contributions to Still Breathing are included in the audiobook companion PDF download.