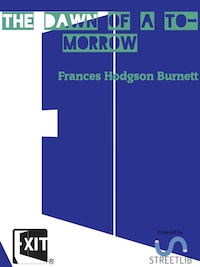 The Dawn of a To-morrow

There are always two ways of looking at a thing, frequently there are six or seven; but two ways of looking at a London fog are quite enough. When it is thick and yellow in the streets and stings a man's throat and lungs as he breathes it, an awakening in the early morning is either an unearthly and grewsome, or a mysteriously enclosing, secluding, and comfortable thing. If one awakens in a healthy body, and with a clear brain rested by normal sleep and retaining memories of a normally agreeable yesterday, one may lie watching the housemaid building the fire; and after she has swept the hearth and put things in order, lie watching the flames of the blazing and crackling wood catch the coals and set them blazing also, and dancing merrily and filling corners with a glow; and in so lying and realizing that leaping light and warmth and a soft bed are good things, one may turn over on one's back, stretching arms and legs luxuriously, drawing deep breaths and smiling at a knowledge of the fog outside which makes half-past eight o'clock on a December morning as dark as twelve o'clock on a December night. Under such conditions the soft, thick, yellow gloom has its picturesque and even humorous aspect. One feels enclosed by it at once fantastically and cosily, and is inclined to revel in imaginings of the picture outside, its Rembrandt lights and orange yellows, the halos about the street-lamps, the illumination of shop-windows, the flare of torches stuck up over coster barrows and coffee-stands, the shadows on the faces of the men and women selling and buying beside them. Refreshed by sleep and comfort and surrounded by light, warmth, and good cheer, it is easy to face the day, to confront going out into the fog and feeling a sort of pleasure in its mysteries. This is one way of looking at it, but only one.