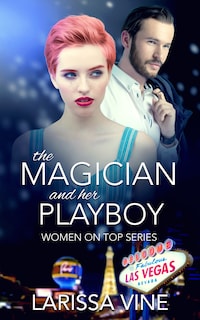 The Magician and her Playboy

Believe in the magic of love.

Lydia Greene is beginning to believe that magic is real. One minute, she’s an up-and-coming illusionist scrabbling to make a living and, the next minute, hot billionaire Conner McCullagh offers to take her show to Las Vegas. It’s not like she trusts him. After what happened with her dad, she refuses to believe in any man. Even so, she’s delighted that handsome Conner is giving her a chance at the big time.

Property developer and playboy Conner is facing a test. He has two months to make a failing hotel profitable. If he succeeds, he’ll get to strike out on his own in a new career with his father’s blessing. Conner believes that Lydia’s astounding act will be the solution. Hopefully, she’ll work her magic on the hotel just like she’s working it on him.

In Vegas, Lydia becomes caught up in the excitement of her unfolding romance with Conner. But things aren’t as they appear. The magician who’s helping her to prepare for her show isn’t as well-intended as she first thinks and, suspicious, she turns detective…and discovers an underbelly of darkness beneath Vegas’ glitz.

Conner and Lydia are two people from two different worlds who believe in the magic of love. But if they want their future together to be more than an illusion, they’re going to need more than abracadabra…