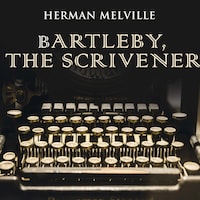 ”Bartleby, the Scrivener: A Story of Wall Street” is a short story by the American writer Herman Melville, first serialized anonymously in two parts in the November and December 1853 issues of Putnam's Magazine, and reprinted with minor textual alterations in his The Piazza Tales in 1856.
In the story, a Wall Street lawyer hires a new clerk who, after an initial bout of hard work, refuses to make copies or do any other task required of him, with the words, ”I would prefer not to”.
The narrator is an elderly, unnamed Manhattan lawyer with a comfortable business in legal documents. He already employs two scriveners, Nippers and Turkey, to copy legal documents by hand, but an increase in business leads him to advertise for a third. He hires the forlorn-looking Bartleby in the hope that his calmness will soothe the irascible temperaments of the other two...
Among the most significant works Herman Melville -
”Bartleby: La formula della creazione” (1993) of Giorgio Agamben and ”Bartleby, ou la formule by Gilles Deleuze” are two important philosophical essays reconsidering many of Melville's ideas, ”A Peep at Polynesian Life”, ”А Narrative of Adventures in the South Seas”, ”Mardi: And a Voyage Thither”, ”Redburn: His First Voyage”, ”White-Jacket; or, The World in a Man-of-War”, ”Moby-Dick; or, The Whale”, ”Pierre: or, The Ambiguities”, ”Isle of the Cross”, ”Bartleby, the Scrivener”, The Encantadas, or Enchanted Isles”, ”Benito Cereno”, ”Israel Potter: His Fifty Years of Exile”.