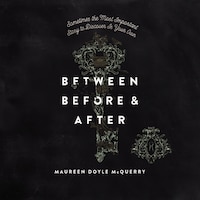 Between Before and After

A mother being dragged ever deeper into the icy waters of depression. A daughter who finds a devastating secret about a shadowy past buried in her mom’s dresser. And the key to unlocking a long-hidden family mystery that could save or destroy much more than their two lives.

Fourteen-year-old Molly worries about school, friends, and her parents’ failed marriage, but mostly about her mother Elaine’s growing depression. Molly knows her mother, who shuts herself off from human connections and instead buries herself in the lives and deaths of the strangers she writes about, is nursing her own carefully-kept secret. But in Elaine’s raw and fragile state, Molly knows not to pry too deeply.

Until her Uncle Stephen is thrust into the limelight because of his miracle cure of a young man and her mother can no longer hide behind other people’s stories. As Molly digs into her mother’s past, she finds a secret hidden in her mother’s dresser that may be the key to unlocking a family mystery dating to 1918 New York—a secret that could save or destroy their future.

Between Before and After is:

A riveting YA story told in dual narratives during the flu epidemic in 1918 New York City and 1955 San Jose, CaliforniaAn historical coming-of-age novel about the complex bonds between mothers and daughters.Written by award-winning poet, novelist, and teacher Maureen McQuerryPerfect for fans of Ruta Sepetys and Laurie Halse Anderson