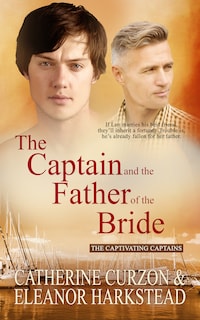 The Captain and the Father of the Bride

If Leo marries his best friend, they’ll inherit a fortune. The only trouble is, he’s already fallen for her father.

Yacht captain Leo’s never stayed in one place long enough to fall in love. That all could change when he’s left a million pounds. But there’s a catch. Leo can only inherit the money if he takes a bride before the year is out. And Leo’s the kind of man who’s only interested in taking a husband.

So Leo and his best friend hatch a plan. She’ll be his pretend bride, and he’ll use his newfound wealth to support her animal sanctuary. What could possibly go wrong?

Archie’s the closest thing to perfect Leo’s ever seen. Dashing, mature and sexy as hell… After one hot night in a London hotel, Leo can’t stop thinking about the legal eagle who’s stolen his heart.

When Leo meets the father of his bride-to-be, he’s in for the shock of his life. Can Archie and Leo join forces to give themselves and a stricken seal pup a second chance, or will a grasping lawyer with a checkbook in place of his heart scupper the happiness of the captain and the father of the bride?