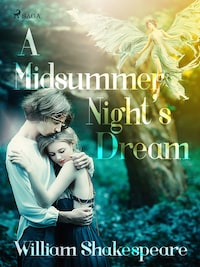 63 pages
AuthorWilliam Shakespeare
TypeE-book
SeriesWorld Classics
Categories
NovelsRomanceHumoristic NovelsRomanceRomanceComedy & HumorHumoristic NovelsClassicsDrama
Share this book
Fairies, magic and creatures from another dimension, ”A Midsummer Night’s Dream” got it all! If you ever saw and loved ”Get Over It” with Kirsten Dunst, this one is for you! This play is an indulgence both in the theatre and on the page as one of William Shakespeare’s sprightliest works.
Set in Ancient Greece, the wood at night disrupts the boundaries between three distinct groups, and no mortal is in control. The beautiful Hermia is in a pickle. Her father has forbidden her to marry her true love, Lysander, wanting her to marry Demetrius, in whom she has no interest. The love triangle develops as it is revealed Hermia’s best friend Helena is in love with Demetrius.
Including broken hearts, mistaken identities and supernatural transformations, this play reflects the drama of the things we would do for love and the irrational behavior of the people under its spell.
William Shakespeare (1564-1616) is widely considered the world's greatest dramatist and is often referred to as England's national poet or the Bard. Most famous for his timeless plays, he also wrote a multitude of poems and sonnets. Shakespeare was the blockbuster writer of his day, his many works concerning universal themes of life, love, death, revenge, grief, jealousy, murder, magic, and mystery. Among some of his most famous are ”Macbeth”, ”Romeo and Juliet”, and ”Hamlet”, but the list is long, and many continue to be studied and performed, both their original form and modern adaptations.