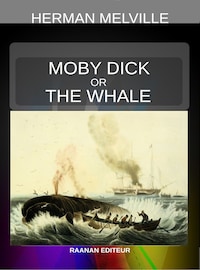 Moby Dick or, The Whale

716 pages
AuthorHerman Melville
TypeE-book
Categories
NovelsNovels
Share this book
Moby-Dick, or, The Whale is an 1851 novel by American writer Herman Melville. The book is the sailor Ishmael's narrative of the obsessive quest of Ahab, captain of the whaling ship Pequod, for revenge on Moby Dick, the giant white sperm whale that on the ship's previous voyage bit off Ahab's leg at the knee.
Plot
Ishmael travels in December from Manhattan Island to New Bedford, Massachusetts, with plans to sign up for a whaling voyage. The inn where he arrives is overcrowded, so he must share a bed with the tattooed cannibal Polynesian Queequeg, a harpooneer whose father was king of the fictional island of Rokovoko. The next morning, Ishmael and Queequeg attend Father Mapple's sermon on Jonah, then head for Nantucket. Ishmael signs up with the Quaker ship-owners Bildad and Peleg for a voyage on their whaler Pequod. Peleg describes Captain Ahab: ”He's a grand, ungodly, god-like man” who nevertheless ”has his humanities”. They hire Queequeg the following morning. A man named Elijah prophesies a dire fate should Ishmael and Queequeg join Ahab. While provisions are loaded, shadowy figures board the ship. On a cold Christmas Day, the Pequod leaves the harbor.
Ishmael discusses cetology (the zoological classification and natural history of the whale), and describes the crew members. The chief mate is 30-year-old Starbuck, a Nantucket Quaker with a realist mentality, whose harpooneer is Queequeg; second mate is Stubb, from Cape Cod, happy-go-lucky and cheerful, whose harpooneer is Tashtego, a proud, pure-blooded Indian from Gay Head; and the third mate is Flask, also from Martha's Vineyard, short, stout, whose harpooneer is Daggoo, a tall African, now a resident of Nantucket...
|Wikipedia|