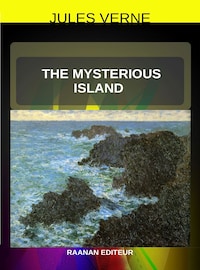 551 pages
AuthorJules Verne
TypeE-book
Categories
NovelsNovels
Share this book
The Mysterious Island (French: L'Île mystérieuse) is a novel by Jules Verne, published in 1875. The original edition, published by Hetzel, contains a number of illustrations by Jules Férat. The novel is a crossover sequel to Verne's famous Twenty Thousand Leagues Under the Seas (1870) and In Search of the Castaways (1867–68), though its themes are vastly different from those books. An early draft of the novel, initially rejected by Verne's publisher and wholly reconceived before publication, was titled Shipwrecked Family: Marooned with Uncle Robinson, seen as indicating the influence of the novels Robinson Crusoe and The Swiss Family Robinson. Verne developed a similar theme in his later novel, Godfrey Morgan (French: L'École des Robinsons, 1882).
Plot
During the siege of Richmond, Virginia, in the American Civil War, POW Capt. Cyrus Harding escapes from his Confederate captors in a rather unusual way – by hijacking an observation balloon. In his escape, Harding is accompanied by sailor Pencroft, his nephew Bert, writer Gideon, loyal soldier Neb, and a dog. A hurricane blows the balloon off course, and the group eventually crash-lands on a cliff-bound, volcanic, uncharted (and fictitious) island, located in the South Pacific, with very unusual inhabitants. They name it ”Lincoln Island” in honour of American President Abraham Lincoln.
The castaways soon encounter a group of people that include the local natives (who worship the island's volcano), Rulu (a woman from Mercury trying to extract an unnamed superexplosive element in order to conquer the Earth), Ayrton (a wild man exiled on the island) and Captain Shard (a ruthless pirate). A mystery man, who possesses great scientific powers, also makes his presence known to the group of people; he is Captain Nemo, who survived the whirlpool in 20,000 Leagues Under the Sea, and unlike the character in the Disney film, was not fatally wounded by military troops from warships. On the way, our quintet of heroes must battle the elements and peoples while trying to figure out a way off the island and back to civilization... | |Wikipedia|