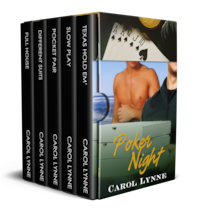 Zac Grainger's life is pretty quiet. Other than coaching high school football, the only excitement he gets is playing poker with his close friends every other Saturday. That is until he opens the door to the hottest pizza delivery man he's ever seen, and man, does Zac want a piece of that pie.

Eric Stanton spends long hours as an intern at one of the largest hospital in San Francisco. To help keep a roof over his head, he also has a part-time job as a pizza delivery driver. When a gorgeous customer tries to flirt with him, Eric's too tired to reciprocate.

Just when Eric wonders if he'll get a second chance with the guy, an order is placed requesting him personally. Tired or not, perhaps things are looking up.

Charter Captain Bobby Quinn loves life on the water. What he hates is working for his brother.

Charter Captain Bobby Quinn loves life on the water. What he hates is working for his brother. After years spent restoring an aging wooden yacht, his brother bought it out from under him. In Bobby's mind, if family will screw you at the drop of a hat so will everyone else so, except for his bi-weekly poker game, he sticks to the solitude of the boat he loves.

Dr. Jules Peters knows all about solitude. When not working endless hours as Head of Emergency Medicine, he's tinkering in his garage. A collector of vintage cars in need of TLC, Jules has an impressive collection of cars but few friends.

Jules meets Bobby when he's given a cruise around the San Francisco Bay as a gift. Although their mutual attraction is explosive, neither man is ready to move out of his comfort zone. It might take a meddling med student and an off-season football coach to get these two loners to see there's more to life than caring for inanimate objects.

For three years, Trey Huggins has watched and wanted Principal Cole Harding. As a teacher in the high school where they both work, Trey knows it'll never happen. Even if Cole was gay, he'd never go for a guy like Trey.

Seeking love in other places, Trey meets a man online and finally agrees to a drink. What he gets instead is a trip to the emergency room in the back of an ambulance. With the school year swiftly approaching, Trey fights to overcome his physical limitations as well as his constant fear.

For twenty-five years, Cole has managed to keep his private life separate from his job. Extending a helping hand to a colleague shouldn't be a big deal, but the feelings Trey invokes in Cole are anything but professional.

Can the teacher tutor the principal in love, or will class be out for these two before the school year even begins?

Angelo Pilato's worked hard to overcome his upbringing. Born in the rough part of the city, he had two choices, learn to fight or learn to talk your way out of confrontation. He isn't prepared to deal with a man like the sexy detective in charge of his friend's case.

Moody Torrance is vastly different than any man Angelo's ever been attracted to. Stubborn and bossy don't begin to describe Moody's personality and those are his positive qualities.

Moody hasn't the time or energy to put up with sissies. He may be gay, but that doesn't mean he's any less the Alpha he was born to be. Within minutes of meeting Angelo Pilato, Moody both hates and wants him. There's nothing more he'd like to do than bring the prissy man down a few pegs and show him life on the wild side.

How do a quirky neurotic and an unbendable Alpha make a relationship work?

Life hasn't been easy for Marco De Le Santo. He's spent the last eight years raising his young brothers and sister. At the age of twenty-four, Marco finally has the chance to explore his feelings for Kent Baker, his boss. He knows Kent thinks he's a playboy, but Marco's finally ready to tell his friend the truth about his secret life. What would Kent say if he knew Marco came with three kids under the age of eighteen?

Kent Baker has watched Marco since the day he stepped into his office. As owner of a construction company, Kent has seen his share of good-looking men, but none of them hold a candle to Marco. Kent has waited years for Marco to grow up and realise there's more to life than partying and random men, but with each year passing year, he becomes bitter.

When Marco finally opens up to Kent, will his boss be angry at the deception or can they build a future that includes Marco's, already, Full House?