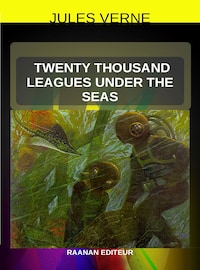 Twenty Thousand Leagues Under the Seas

354 pages
AuthorJules Verne
TypeE-book
Share this book
Twenty Thousand Leagues Under the Seas: A World Tour Underwater (French: Vingt mille lieues sous les mers: Tour du monde sous-marin) is a classic science fiction adventure novel by French writer Jules Verne.
The novel was originally serialized from March 1869 through June 1870 in Pierre-Jules Hetzel's fortnightly periodical. The book is regarded as one of the premiere adventure novels and one of Verne's greatest works, along with Around the World in Eighty Days and Journey to the Center of the Earth. Its depiction of Captain Nemo's underwater ship, the Nautilus, is regarded as ahead of its time, since it accurately describes many features of today's submarines.
During the year 1866, ships of various nationalities sight a mysterious sea monster, which, it is later suggested, might be a gigantic narwhal. The U.S. government assembles an expedition in New York City to find and destroy the monster. Professor Pierre Aronnax, a French marine biologist and the story's narrator, is in town at the time and receives a last-minute invitation to join the expedition; he accepts. Canadian whaler and master harpooner Ned Land and Aronnax's faithful manservant Conseil are also among the participants.
The expedition leaves Brooklyn aboard the United States Navy frigate Abraham Lincoln, then travels south around Cape Horn into the Pacific Ocean. After a five-month search ending off Japan, the frigate locates and attacks the monster, which damages the ship's rudder. Aronnax and Land are hurled into the sea, and Conseil jumps into the water after them. They survive by climbing onto the ”monster,” which, they are startled to find, is a futuristic submarine. They wait on the deck of the vessel until morning, when they are captured, hauled inside, and introduced to the submarine's mysterious constructor and commander, Captain Nemo.
The rest of the novel describes the protagonists' adventures aboard the Nautilus, which was built in secrecy and now roams the seas beyond the reach of land-based governments. In self-imposed exile, Captain Nemo seems to have a dual motivation — a quest for scientific knowledge and a desire to escape terrestrial civilization. Nemo explains that his submarine is electrically powered and can conduct advanced marine research; he also tells his new passengers that his secret existence means he cannot let them leave — they must remain on board permanently...||Wikipedia|