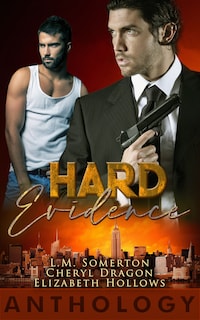 Hiding in plain sight is a risky business—in more ways than one.

Jamie is hiding from the past and sacrificing a lot to do so. After witnessing a murder, he’s on the run from powerful enemies. Taking a job at a rough leather bar, Spikes, is a way to survive off-grid.

Bubba is the bouncer at Spikes who takes a personal interest in protecting Jamie’s very cute behind, but when Jamie runs from the club in panic straight into the path of a van, there’s nothing Bubba can do.

Amnesia puts Jamie at risk, but his returning memories are even more dangerous. Desperate to protect his friends, he puts his life on the line for Bubba—the only person he can rely on to save his neck.

'Under His Protection' by Cheryl Dragon

A cop protecting his witness… It’s all business until desire becomes stronger than rules or self-control.

Detective Matt Blackburn and addiction counselor Josh Braidshaw first crossed paths at the LGBTQ+ youth shelter where they both volunteered. There was mutual attraction and plenty of flirtation, but Josh’s relationship kept anything from happening beyond that.

The duo is again thrown together when Josh is attacked while witnessing a young boy from the shelter being kidnapped. Matt puts Josh under his personal protection and things heat up, now that both men are free. Josh wants his normal life back and Matt isn’t keen to lose his career by crossing a professional line, but their close quarters and the heat that simmers between them might cause them both to change their priorities.

'Ticket to Freedom' by Elizabeth Hollows

When Calvin wishes for a knight in shining armor to save him from the criminals he works for, the last thing he expects is Felix.

Calvin Hughes works in a bar run by a criminal empire. He hates his life and desperately wants to escape, but he is afraid of reprisal if he does.

No one who stands up to the criminals walks away alive. It’s too risky. Who would do it?

Felix crashes into Calvin’s life and immediately throws him into danger. Felix has done the unthinkable and stolen important information from the criminals. They want him dead and, after being in the wrong place at the wrong time, they want Calvin dead too.