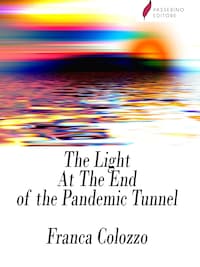 The Light At The End of the Pandemic Tunnel

5 pages
AuthorFranco Colozzo
TypeE-book
Categories
Non-fictionSociety & Culture
Share this book
I would like to present you opportunities to successfully ride the pandemic crisis. I will do my best by sharing some information with you that I think is worth looking at now that the crisis is raging worldwide. So I start with the words of a very famous mathematician, as well as the author of “The Black Swan”, who says that people often don’t realize that they have a chance, so they are wrong, they always lose the chances and see the possibilities when the crisis has passed. Therefore I think this is one of the most critical times we are experiencing.

Franca Colozzo was born in Gaeta (LT) – Italy, where she currently lives. On 31/03/2018, by Richard Di Pilla, an American influencer and founder of GGA family (Virginia, USA), was nominated Global Goodwill Ambassador and then GGA Director_ITALY and Vice Chairperson of INSPAD Council on behalf of its founder & President, Dr. Muhammad Tahir Tabassum.

Winner of a scholarship by the Chamber of Commerce Latina for her thesis on Urbanism and on historical towns, she has written an Art book: ”The bell tower of the Gaeta Dome”, published by the ”Historical Cultural Center of Gaeta”.

After various jobs, both as a freelancer and as a teacher, she was seconded from 1996 to 2002 at the Italian Scientific High School, I.M.I. of Istanbul (Turkey), after having passed several linguistic selections organized by the Italian Foreign Affairs Office (M.A.E.).

During the seven years abroad, also thanks to the multi-ethnic and multi-cultural experience, she has organized several exhibitions of Art both at the I.M.I. High School, at the College of the Sisters of Ivrea, at the Italian Institute of Culture and at the most prestigious universities in Istanbul (Robert College, Galata Saray Lisesi, Yildiz Universitesi, etc.).

During these exhibitions, she tried to apply in the drawings and in the books her personal studies arising from the poetic and artistic teaching practice.

The wish to learn the Turkish language - together with other European languages - has been the driving force for building a bridge between two cultures so different: the Italian and the Turkish ones .

The cultural differences between them were filled thanks to the publication, in 1999, of a Catalog of drawings and an illustrated trilingual Vocabulary (Italian, English and Turkish).

Coming back to Italy, in September 2002, she tried to instill the foreign activities into the new trial of teaching through exhibitions drawing on the artistic didactic path of the pupils of the High School ”LB Alberti ” of Minturno (LT), and subsequently those of the High School ”M.T. Cicero” Formia (LT) .

Following her previous experience, she decided to publish, in 2006, the booklet of poems ”Fragments”, a collection of poems that have their roots in the past and in a more recent one, confined to the margins of an adolescent joy of living .

She was also selected, 2005, as E.N.D. OIB1, Building Policy - GUIM 06/51, at the EUROPEAN COMMUNITY OF BUXELLES (BELGIUM).
From September 2011 she retired from teaching, continuing to practice as a freelance architect, painter and writer of poems, essays and novels.