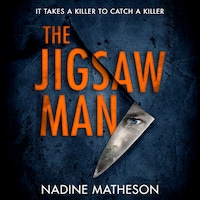 ‘Fans of crime fiction will adore this gruesome debut’ Red

‘A spellbinding game of cat and mouse . . . with chilling echoes of Thomas Harris’s The Silence of the Lambs’ Daily Mail

‘Move over, Hannibal Lecter, there's a new serial killer on the block in this awesome debut from Nadine Matheson. The Jigsaw Man will have you in pieces. Literally’ David Jackson, author of The Resident

There's a serial killer on the loose.

When bodies start washing up along the banks of the River Thames, DI Henley fears it is the work of Peter Olivier, the notorious Jigsaw Killer. But it can’t be him; Olivier is already behind bars, and Henley was the one who put him there.

The race is on before more bodies are found.

She’d hoped she’d never have to see his face again, but Henley knows Olivier might be the best chance they have at stopping the copycat killer. But when Olivier learns of the new murders, helping Henley is the last thing on his mind . . .

Will it take a killer to catch the killer?

Now all bets are off, and the race is on to catch the killer before the body count rises. But who will get there first – Henley, or the Jigsaw Killer?

Authors are GRIPPED by The Jigsaw Man:

'So tense and dark. It has a real Silence of the Lambs vibe, and Peter Olivier is my new Hannibal Lecter. Brilliant' Lisa Hall, author of Between You and Me

‘Buckle up, readers! From the first scene, Nadine Matheson takes us on a heart-pounding roller coaster ride . . .The Jigsaw Man will take your breath away again and again’ Tami Hoag, Sunday Times bestselling author of The Boy