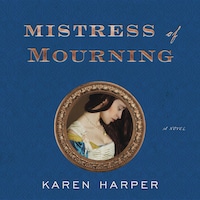 Varina Westcott is a young widow and a talented candle maker for the royal court and church. At a time of great political unrest in 1501, Varina is conscripted for a secret project by Queen Elizabeth of York. Her task? To carve wax figures of four dead children: two of the queen's children who passed away in infancy and the queen's two brothers, the two Princes of the Tower, who disappeared without a trace in 1483. Losing a child herself, Varina has a sympathetic bond with the queen and does the clandestine deed willingly -- and with Nicholas Sutton, the ambitious and handsome assistant to the royals.

But soon, news comes to the court: the queen's eldest child, heir to the throne, Arthur, Prince of Wales, has died. Deep in her grief, Elizabeth of York does not believe her son died of natural causes or because of a sudden illness -- she believes he was murdered by the king's enemies. Elizabeth turns to Varina and Nicholas for another secret task, this time much bigger than simple wax figures.

Varina now must travel to Wales and investigate Arthur's death, turning up any and everything that will prove there was a crime. But as the pair unearth clues, each more unsettling than the last, Varina and Nicholas fear that the conspiracy they've come across is much bigger than the queen had ever imagined. . . and the Tudor dynasty is at risk for complete and utter destruction.