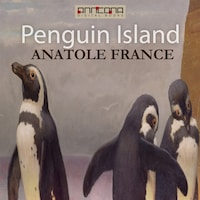 Penguin Island is a satire novel by French Nobel laureate Anatole France, first published in 1908. The Novel is written in the style of a sprawling 18th- and 19th-century history book, concerned with grand metanarratives, mythologizing heroes, hagiography and romantic nationalism.

It is about a fictitious island, inhabited by great auks, that existed off the northern coast of Europe (it was a flightless bird of the alcid family that became extinct in the mid-19th century, resemling a penguin).

The history begins when a wayward Christian missionary monk lands on the island and perceives the upright, unafraid auks as a sort of pre-Christian society of noble pagans. Mostly blind and somewhat deaf, having mistaken the animals for humans, he baptizes them.

This causes a problem for The Lord, who normally only allows humans to be baptized. After consulting with saints and theologians in Heaven, He resolves the dilemma by converting the baptized birds to humans with only a few physical traces of their ornithological origin, and giving them each a soul.

Once baptized, the birds have no choice but to become human. They take on human traits (build civilizations, go to war, etc.). The book is very funny and powerful.

He was a member of the Académie française, and won the 1921 Nobel Prize for Literature "in recognition of his brilliant literary achievements, characterized as they are by a nobility of style, a profound human sympathy, grace, and a true Gallic temperament".