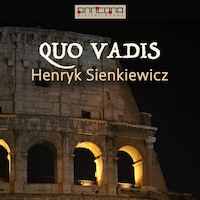 Quo Vadis: A Narrative of the Time of Nero, commonly known as Quo Vadis, is a historical novel written by Polish author Henryk Sienkiewicz.

The novel tells of a love that develops between a young Christian woman, Ligia, and Marcus Vinicius, a Roman patrician. It takes place in the city of Rome under the rule of emperor Nero, circa AD 64.

Sienkiewicz’s epic novel of ancient Rome finds the Roman Empire at the height of her power and splendor, but struggling with the madness and cruelty of the Emperor Nero. A new religion is sweeping across the world, causing many Romans to wonder and leading many others to sacrifice everything for it. Yet, even as a great city burns and darkness threatens to overwhelm the age, hope is found in the love of the Roman tribune Marcus Vinicius for the beautiful Christian maiden Lygia, and in his journey toward his life’s true purpose.

Sienkiewicz studied the Roman Empire extensively prior to writing the novel, with the aim of getting historical details correct. Consequently, several historical figures appear in the book.

Published in installments in three Polish dailies in 1895, it came out in book form in 1896 and has since been translated into more than 50 languages. The novel contributed to Sienkiewicz's Nobel Prize for literature in 1905. Several movies have been based on Quo Vadis.

Henryk Sienkiewicz (1846-1916) was a Polish journalist and Nobel Prize-winning novelist. A Polish noble, he was one of the most popular Polish writers at the turn of the 19th and 20th centuries, and received the Nobel Prize in Literature in 1905 for his "outstanding merits as an epic writer."

Many of his novels remain in print. In Poland he is best known for his "Trilogy" of historical novels – With Fire and Sword, The Deluge, and Fire in the Steppe – set in the 17th-century Polish-Lithuanian Commonwealth; internationally he is best known for Quo Vadis, set in Nero's Rome.