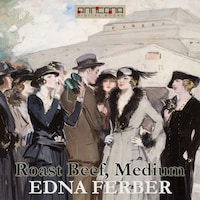 This book follows the adventures of Emma McChesney, a smart and savvy divorced mother who travels the Midwest as a sales representative for a large skirt and petticoat manufacturer.

Her many adventures with people, (including predatory salesmen and hotel clerks), are funny and poignant. She is hardworking and able to outsell the slickest of the men salesmen. She has learned to focus on her work and her seventeen-year-old son, Jock.

Experience has taught her that it is usually best to stick to roast beef, medium and not get stomach ache with fancy sauces and exotic dishes.

This is the first of three volumes following the career and adventures of Emma McChesney.

Edna Ferber rose to fame, in fact, on her short stories about the adventures of Emma, about whom the phrase "one smart cookie" might have been coined.