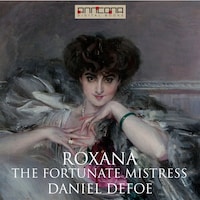 Roxana: The Fortunate Mistress (full title: The Fortunate Mistress: Or, A History of the Life and Vast Variety of Fortunes of Mademoiselle de Beleau, Afterwards Called the Countess de Wintselsheim, in Germany, Being the Person known by the Name of the Lady Roxana, in the Time of King Charles II) is a 1724 novel by Daniel Defoe.

The novel concerns the story of an unnamed "fallen woman", the second time Defoe created such a character (the first was a similar female character in Moll Flanders). In Roxana, a woman who takes on various pseudonyms, including "Roxana" (after Roxana, wife of Alexander the Great), describes her fall from wealth thanks to abandonment by a "fool" of a husband, and movement into prostitution upon his abandonment. Roxana moves up and down through the social spectrum several times, by contracting an ersatz marriage to a jeweler, secretly courting a prince, being offered marriage by a Dutch merchant, and is finally able to afford her own freedom by accumulating wealth from these men.

The novel examines the possibility of eighteenth century women owning their own estate despite a patriarchal society, as with Roxanna's celebrated claim that "the Marriage Contract is...nothing but giving up Liberty, Estate, Authority, and every-thing, to the Man". The novel further draws attention to the incompatibility between sexual freedom and freedom from motherhood: Roxana becomes pregnant many times due to her sexual exploits, and it is one of her children, Susan, who come back to expose her, years later, near the novel's close, helping to precipitate her flight abroad, subsequent loss of wealth, and (ambiguous) repentance.

The character of Roxana can be described as a proto-feminist because she carries out her actions of prostitution for her own ends of freedom but before a feminist ideology was fully formed, (though Defoe also works to undercut the radicalism of her position); while the book also explores the clash of values between the Restoration court and the middle-class.

Published anonymously, and not attributed to Defoe till 1775, Roxana was nonetheless a popular hit in the eighteenth century.

Also in 1722, Defoe wrote Moll Flanders, another first-person picaresque novel of the fall and eventual redemption of a lone woman in 17th century England. The titular heroine appears as a whore, bigamist and thief, lives in The Mint, commits adultery and incest, yet manages to retain the reader's sympathy.

Moll Flanders and Defoe's final novel Roxana: The Fortunate Mistress are examples of the remarkable way in which Defoe seems to inhabit his fictional (yet "drawn from life") characters, not least in that they are women. The latter narrates the moral and spiritual decline of a high society courtesan.