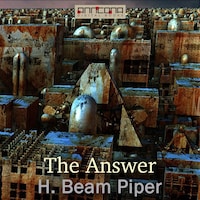 The Answer is a science fiction short story written by H. Beam Piper, first published in 1959.

It is 1984, fifteen years since the nuclear war between the United States and the Soviet Union devastated the entire northern half of the planet Earth, and now nuclear scientists Professor Doctor Lee Richardson and Comrade Professor Alexis Petrovitch Pitov are working together on a project in Argentina. During their research, they have created fifteen kilograms of negamatter iron, and they are going to drop it from space to see what happens…

The Answer made its first appearance in the December 1959 issue of Fantastic Universe Science Fiction. It is not a part of either Piper’s Terro-Human Future History series nor his Paratime series.

Henry Beam Piper (1904-1964) was an American science fiction author. He wrote many short stories and several novels. He is best known for his extensive Terro-Human Future History series of stories and a shorter series of "Paratime" alternate history tales. Piper's stories fall into two camps: stark space opera, such as Space Viking, or stories of cultural conflict or misunderstanding, such as Little Fuzzy or the Paratime stories.