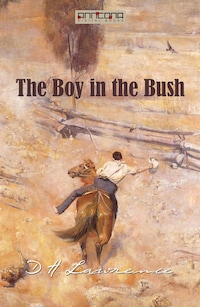 The Boy in the Bush

The Boy in the Bush is a novel by D. H. Lawrence set in Western Australia, first published in 1924. It is derived from a story in a manuscript given to Lawrence by Mollie Skinner, entitled The House of Ellis. Lawrence and his wife Frieda stayed with Skinner at her guesthouse in Darlington, Western Australia in 1922.

A young Englishman, Jack Grant, has been sent by his parents to make a new life in the raw, pioneering colony of Western Australia in the 1880s. He is met at the dock by Mr George, a somewhat Dickens-like character, who introduces him to his mother's relatives.

Jack has many adventures and meets many memorable, vibrantly alive characters, some of whom are amusingly eccentric. He tames horses, fights kangaroos, and competes for the love of two cousins, the twany-eyed Monica whom he marries and the dark-eyed Mary who entrances him. He reaches a vigorously independent young manhood, with an intensely vivid vision of life for the future.

The Boy in the Bush was made into a television miniseries in 1984, directed by Rob Stewart and starring Kenneth Branagh and Sigrid Thornton.