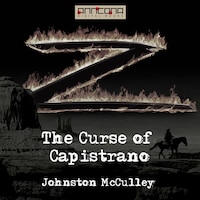 The Curse of Capistrano (The Mark of Zorro)

The Curse of Capistrano is a 1919 story by Johnston McCulley and the first work to feature the fictional Californio character Zorro (zorro is the Spanish word for fox). After the enormous success of the 1920 film adaptation, The Mark of Zorro, the story was republished 1924 under that name.

The book tells of the story of Californio Don Diego Vega - Zorro - in the company of his deaf and mute servant Bernardo and his lover Lolita Pulido, as they rival the antagonists Captain Ramon and Sgt. Gonzales in early 19th-century California, before it became a U.S. state. It is set amongst the historic Spanish missions in California, pueblos (towns) such as San Juan Capistrano, California, and the rural California countryside.

Johnston McCulley (1883-1958) was the author of hundreds of stories, fifty novels, numerous screenplays for film and television, and the creator of the character Zorro. Many of his novels and stories were written under pseudonyms. Aside from Zorro, McCulley created many other pulp characters, including Black Star, The Mongoose, and Thubway Tham. Many of McCulley's characters; the Green Ghost, the Thunderbolt, and the Crimson Clown, were inspirations for the masked heroes that have appeared in popular culture from McCulley's time to the present day.