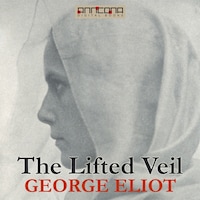 The Lifted Veil is a horror novella by George Eliot, first published in 1859.

The novella explores themes of extrasensory perception, the essence of physical life, possible life after death, and the power of fate.

The Lifted Veil departs radically from the grounded realism of her longer and better known works, such as Middlemarch and Daniel Deronda. Its tone calls to mind the works of middlebrow Sensationists, like Wilkie Collins (The Moonstone), and of some of the better known authors of Victorian era horror writings, such as Bram Stoker (Dracula) and Mary Shelley (Frankenstein).

Eliot here explores mystical themes, considering the world of phenomena which are felt but not seen. Yet in doing so she suggests that the apparent clairvoyance of her main character, Latimer, may in fact be, at least in part, psychological expressions of his early life experiences.

Much of this work’s power and complexity lie in Latimer’s relationship with Bertha. Bertha is the one person whose thoughts and feelings he is not able to read, raising the question: What is it about Bertha that renders her inaccessible to his psychic penetration – and what does this tell us about her, and about him.

The novella is a significant part of the Victorian tradition of horror fiction.