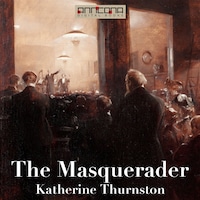 The Masquerader is one of two Katherine Thurston’s books that appeared on the Publisher’s Weekly best-seekers list in 1905 (The other was The Gambler).

The Masquerader is part mystery, part romance and part political thriller – all tied up in one neat package. Nature has a way of sometimes making two people nearly indistinguishable in appearance. Such is the premise for this book.

John Chilcote, a British politician, and John Loder, a man down on his luck meet by accident one night during one of London’s worst fogs. Chilcote, addicted to morphine, needs to escape his political responsibilities and presents an offer to Loder to exchange places occasionally. Loder, reluctant at first, finally accepts the proposal and finds he fits into Chilcote’s role – perhaps better than Chilcote himself.

The exchanges become more frequent and lengthy. Loder, finding his way, discovers he is worthy of Chilcote’s position, especially during an international crisis, but when Chilcote reclaims his life, Loder’s accomplishments try to unravel.

Two women are intimately involved in this story – one is Chilcote’s wife, Eve, who is a wife of convenience rather than love. The second is Lady Astrupp. We will say little about Lady Astrupp except that she adds a great deal of suspense to the story. In such a charade, things do not always go as expected. Does Chilcote break his drug habit? What becomes of Loder? Does Eve become suspicious as a wife might? Is the masquerade exposed…

Katherine Cecil Thurston (1875-1911) was an Irish novelist. Katherine Thurston's novels achieved success not only in Great Britain but in the United States as well.

Her best known work was a political thriller titled John Chilcote, M.P. (as The Masquerader in the United States) published in 1904. It was on the New York Times Best Seller list for two years, ranking as the third best-selling book for 1904 and the seventh best selling in 1905. Ms. Thurston's next book, The Gambler, came out in 1905 and it too made the list of bestselling novels in the United States for that year, coming in at number 6. It marked the first time the New York Times recorded any author, female or male, as having two top ten books in a single year.