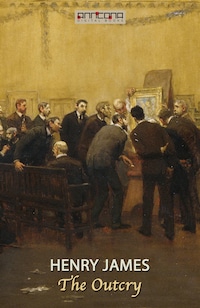 The Outcry is a novel by Henry James published in 1911. The Outcry was the last novel James was able to complete before his death in 1916.

The storyline concerns the buying up of Britain's art treasures by wealthy Americans. To cover the gambling debts of his daughter Kitty Imber, the widowed Lord Theign is planning to sell his beautiful painting Duchess of Waterbridge by Sir Joshua Reynolds to American billionaire Breckenridge Bender.

Hugh Crimble, a young art critic, argues against the sale, saying that Britain's art treasures should stay in the country. He is supported by Theign's perceptive daughter, Lady Grace. When the newspapers get wind of the potential sale of the Reynolds, they raise a patriotic outcry...

While the controversy in this novel might seem hopelessly remote and trivial, it's seemingly similar to the furor that erupted during the 1980s in the United States, when Japanese buyers were snapping up "trophy acquisitions" in America.

The Outcry was originally conceived as a play. James cast the material in a three-act drama in 1909, but like many of his plays, it failed to be produced. In 1911 James converted the play into a novel, which was successful with the public.