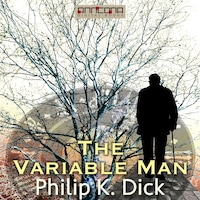 The Variable Man is a science fiction novella by Philip K. Dick, first published in 1953.

“He fixed things—clocks, refrigerators, vidsenders and destinies. But he had no business in the future, where the calculators could not handle him. He was Earth’s only hope—and its sure failure!”

Predictability has come a long way. The computers of the future can tell you if you’re going to win a war before you fire a shot. Unfortunately they’re predicting perpetual standoff between the Terran and Centaurian Empires.

What they need is something unpredictable, what they get is Thomas Cole, a man from the past accidently dragged forward in time. Will he fit their calculations, or is he the random variable that can break the stalemate?