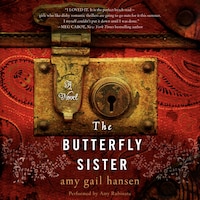 The past just arrived on Ruby's doorstep . . .

To uncover the truth about a friend's disappearance, a fragile young woman must silence the ghosts of her past in this moving debut tale that intertwines mystery, madness, betrayal, love, and literature.

”My past was never more than one thought, one breath, one heartbeat away. And then, on that particular October evening, it literally arrived at my doorstep.”

Twenty-two-year-old Ruby Rousseau is haunted by memories of Tarble, the women's college she fled from ten months earlier, and the painful love affair that pushed her to the brink of tragedy.

When a suitcase belonging to a former classmate named Beth arrives on her doorstep, Ruby is plunged into a dark mystery. Beth has gone missing, and the suitcase is the only tangible evidence of her whereabouts.

Inside the bag, Ruby discovers a tattered copy of Virginia Woolf's A Room of One's Own, the book she believes was a harbinger of her madness. Is someone trying to send her a message—and what does it mean?

The search for answers leads to Tarble. As Ruby digs into Beth's past, she has no choice but to confront her own—an odyssey that will force her to reexamine her final days at school, including the married professor who broke her heart and the ghosts of illustrious writers, dead by their own hand, who beckoned her to join their tragic circle.

But will finding the truth finally set Ruby free . . . or send her over the edge of sanity?