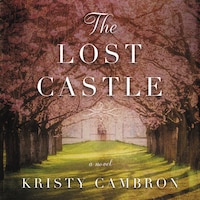 Bridging the past and present in three time periods—the French Revolution, World War II, and present day—The Lost Castle is an enchanting, interwoven story of three resilient women connected by a storybook castle that stands witness to their lives.

1789: Aveline Saint-Moreau is a wealthy and beautiful young aristocrat preparing for her betrothal to the Duc et Vivay’s heir Philippe, but the French Revolution looms as the Bastille is stormed in Paris.

1944: Viola Hart is a Resistance fighter in France during World War II, desperately trying to root out the evil taking hold in her country as the Nazis occupy France.

Present day: Ellie Carver is in a race against time to deliver a decades-overdue message as her grandmother fades into the shadows of Alzheimer’s. Embarking on a journey to France’s Loire Valley, Ellie can only hope to unearth the secrets of the mysterious castle before time silences them forever.

As Ellie’s journey unfolds, so too do the journeys of the two other women, each of their stories woven together through their connection with the forgotten French castle—a castle that plays a part in saving each one of them.

With tales of loves won and lost, battles waged in the hearts of men, and a legacy of faith spanning generations, The Lost Castle is a sweeping story of three strong women making history.

Praise for The Lost Castle:

“Spanning the French Revolution, World War II and today, Cambron masterfully carries us into each period with all the romance and danger of the best fairy tale.” —Katherine Reay

“It’s been a long time since I’ve been so thoroughly engrossed in a novel . . . The Lost Castle kept me spellbound!” —Tamera Alexander