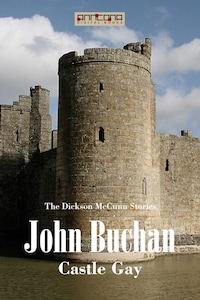 Castle Gay is a novel by John Buchan. It is the second of his three Dickson McCunn books and is set in south west Scotland in the Dumfries and Galloway region in the 1920s.

Castle Gay is one half Pilgrim’s Progress, one half commentary on tradition, mixed up in a splendid adventure story. It begins with a dull, timid newspaper magnate, Thomas Carlyle Craw, who finds himself kidnapped (victim of a misfired college prank) and deposited in a lodge in the remote Border mountains of Scotland. Irascible, whiny, and wholly unused to bodily exertion, he is forced to undertake a lengthy sojourn in the wilderness, by the end of which he has become a new man. But his is no tale of solitary man battling the impersonal forces of nature and finding strength to conquer deep within himself; from the outset, like Dante, he is given a guide through the scenes of humiliation. It is no hell through which he travels, but the comfortable and homely world of the Scots countryside, quick to offer him a bed by the fire and endless plates of ham and eggs. Yet this same world also offers dangers and discomfort aplenty, and with them comes slow life into the soul of the pilgrim.

The Dickson McCunn Trilogy is a set of three books by John Buchan. The novels in the trilogy are Huntingtower (1922), Castle Gay (1930) and The House of the Four Winds (1935).