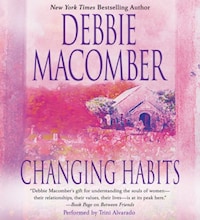 They were sisters once.

Almost forty years ago, in a more innocent time, two girls enter the convent. Angelina and Joanna come from vastly different backgrounds, but they have one thing in common -- a desire to serve, to join in the community of sisters.

Despite the relative seclusion of the convent house in Minneapolis, they're not immune to what's happening in the world around them. In 1972 Angie's involvement with a pregnant teenager triggers a crisis of faith. At the same time, Joanna's relationship with a Vietnam veteran brings her face-to-face with the choices she made -- and didn't make -- in her own life.

Then, Angie and Joanna leave the sisterhood, abandoning the convent for the exciting and confusing world outside. The world of choices to be made, of risks to be taken. Of men and romantic love. The world of ordinary women ...

Debbie Macomber illuminates women's lives with compassion, with love and with grace. In Changing Habits she proves once again why she's one of the world's most popular writers of fiction for -- and about -- women.