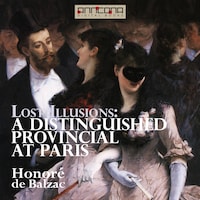 A Distinguished Provincial At Paris

A Distinguished Provincial at Paris (1839) is the second book in Balzac’s Lost Illusions trilogy, which is part of his sweeping set of novels collectively titled La Comédie Humaine.

The story is set in post-Napoleonic France, when the new bourgeoisie was jostling for position alongside the old aristocracy. In the first volume of the trilogy (Two Poets, 1837), we met Lucien Chardon, an aspiring poet who feels stymied by the pettiness of provincial life. In the present volume, Lucien, now using the more aristocratic-sounding surname ”de Rubempré,” leaves behind his family in order to seek fame and fortune in the literary world of Paris. He is tested by challenges that are literary, social, financial, and ethical.

Balzac’s work was hugely influential in the development of realism in fiction. The Lost Illusions trilogy is one of his greatest achievements, and is named in the reference work: 1001 Books You Must Read Before You Die. The final volume in the trilogy is Ève and David (1843).