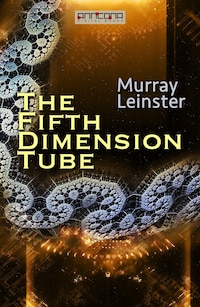 The Fifth-Dimension Tube is a science fiction novella by Murray Leinster first published in 1933.

The novella is a sequel to The Fifth-Dimension Catapult (1931).

This 1933 action-adventure novella follows Tommy Reames, Professor Denham and his daughter, Evelyn, into a strange world in another dimension, where the citizens of a golden city are at war with drug-crazed madmen from the jungle and gangsters from Earth.

By way of Professor Denham’s Tube, Tommy and Evelyn invade the inimical Fifth-Dimensional world of golden cities and tree-fern jungles and Ragged Men.

The Fifth-Dimension Tube was first published in Astounding Stories of Super-Science January 1933.