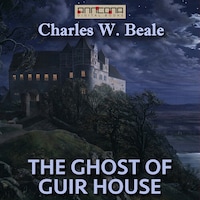 The Ghost of Guir House

The Ghost of Guir House is a horror novel by American writer Charles Willing Beale first published in 1897.

Do you think you understand ghosts? Now you will.

1890s spiritualism infuses this weird, ghostly tale of a spirit romance and a mysterious crime that Mr. Henley's must attempt to solve.

A story which one might call scientific in comparison with the ordinary tale of shades and spooks. The ghost of a dwelling as well as of its inhabitants is a novelty in the literature of the supernatural, yet, if one accepts Mr. Beale's reasoning, both come within the limits of possibility.

Paul Henley, seemingly summoned to a mysterious rural Virginia mansion from his home in New York, finds himself as a guest at a remote, dilapidated colonial house with a host and a hostess every bit as mysterious as the house itself.

Might Dorothy, his hostess, somehow be implicated in the hideous crime which he came to know took place in the hidden depths of Guir House some years ago?

He hardly thought so, she seemed so innocent. And yet ....

Charles Willing Beale (1845-1932) was an American author who wrote supernatural stories like The Ghost of Guir House (1897) and science fiction like The Secret of the Earth (1899). He was born in Washington and and educated at the University of Pennsylvania.