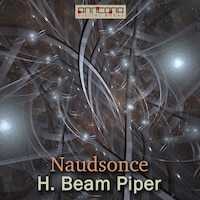 Naudsonce is a science fiction novella by H Beam Piper first published in 1962.

Naudsonce? What does THAT mean? Well, to find out you will need to read or listen to this story where Piper's unique mind explores what we mean by 'communication' and how it happens.

The joint Space Navy-Colonial Office expedition was looking for new planets suitable for colonization; they had been out, now, for four years, which was close to maximum for an exploring expedition. They had entered eleven systems, and made landings on eight planets. Three had been reasonably close to Terra-type but were all disqualified by terrible animals or warlike inhabitants.

Now, finally here was an ideal world; their last chance before returning in disgrace. Now the only thing was to get an agreement from the local king or whatever to the colonization. Easy, right? Well first, you've got to talk to them... and there the trouble starts.