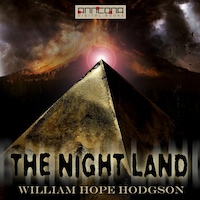 The Night Land is a classic horror novel by William Hope Hodgson, first published in 1912. As a work of fantasy it belongs to the Dying Earth subgenre.

The importance of The Night Land was recognised by its later revival in paperback by Ballantine Books, which republished the work in two parts as the 49th and 50th volumes of its celebrated Ballantine Adult Fantasy series in July 1972.

H. P. Lovecraft's essay ”Supernatural Horror in Literature” describes the novel as ”one of the most potent pieces of macabre imagination ever written”. Clark Ashton Smith wrote of it that ”In all literature, there are few works so sheerly remarkable, so purely creative, as The Night Land. Whatever faults this book may possess, however inordinate its length may seem, it impresses the reader as being the ultimate saga of a perishing cosmos, the last epic of a world beleaguered by eternal night and by the unvisageable spawn of darkness. Only a great poet could have conceived and written this story; and it is perhaps not illegitimate to wonder how much of actual prophecy may have been mingled with the poesy.”

When the book was written, the nature of the energy source that powers stars was not known: Lord Kelvin had published calculations based on the hypothesis that the energy came from the gravitational collapse of the gas cloud that had formed the sun and found that this mechanism gave the Sun a lifetime of only a few tens of million of years. Starting from this premise, Hodgson wrote a novel describing a time, millions of years in the future, when the Sun has gone dark.

William Hope Hodgson (1877-1918) was an English author. He produced a large body of work, spanning several overlapping genres including horror, fantastic fiction and science fiction. Hodgson used his experiences at sea to lend authentic detail to his short horror stories, many of which are set on the ocean, including his series of linked tales forming the ”Sargasso Sea Mythos”. He died in World War I at the age of 40.

Hodgson is most widely known for two works. The House on the Borderland is a novel of which H. P. Lovecraft wrote ”but for a few touches of commonplace sentimentality [it] would be a classic of the first water”. The Night Land is a much longer novel, written in an archaic style and expressing a sombre vision of a sunless far-future world. These works both contain elements of science fiction, although they also partake of horror and the occult. According to critical consensus, in these works, Hodgson achieves a deep power of expression, which focuses on a sense not only of terror but of the ubiquity of potential terror, of the thinness of the invisible boundary between the world of normality and an underlying, unaccountable reality for which humans are not suited.