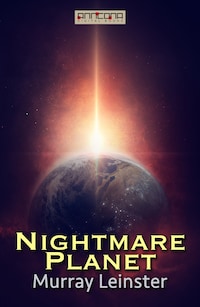 Nightmare Planet is a science fiction novella by Murray Leinster first published in 1953.

In science fiction, as in all categories of fiction, there are stories that are so outstanding from the standpoint of characterization, concept, and background development that they remain popular for decades.

Two such stories were Murray Leinster's The Mad Planet and Red Dust. Originally published in 1923, they have been reprinted frequently.

Nightmare Planet is the final story in the series. It is not necessary to have read the previous stories to enjoy this one.

Once again, Burl experiences magnificent adventures against a colourful background, but to the whole the author has added philosophical and psychological observations that give this story a flavour seldom achieved in science fiction.

Nightmare Planet was first published in Science Fiction Plus June 1953.