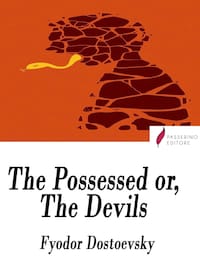 The Possessed or, The Devils

783 pages
AuthorFyodor Dostoevsky
TypeE-book
Categories
NovelsNovels
Share this book
Demons; sometimes also called The Possessed or The Devils, is a novel by Fyodor Dostoevsky, first published in the journal The Russian Messenger in 1871–72. It is considered one of the four masterworks written by Dostoevsky after his return from Siberian exile, along with Crime and Punishment (1866), The Idiot (1869) and The Brothers Karamazov (1880). Demons is a social and political satire, a psychological drama, and large-scale tragedy. Joyce Carol Oates has described it as ”Dostoevsky's most confused and violent novel, and his most satisfactorily 'tragic' work.” According to Ronald Hingley, it is Dostoevsky's ”greatest onslaught on Nihilism”, and ”one of humanity's most impressive achievements—perhaps even its supreme achievement—in the art of prose fiction.”

Fyodor Mikhailovich Dostoevsky (11 November 1821 – 9 February 1881), sometimes transliterated Dostoyevsky, was a Russian novelist, short story writer, essayist, journalist and philosopher. Dostoevsky's literary works explore human psychology in the troubled political, social, and spiritual atmospheres of 19th-century Russia, and engage with a variety of philosophical and religious themes. His most acclaimed works include Crime and Punishment (1866), The Idiot (1869), Demons (1872), and The Brothers Karamazov (1880). Dostoevsky's body of work consists of 11 novels, three novellas, 17 short stories, and numerous other works. Many literary critics rate him as one of the greatest psychologists in world literature. His 1864 novella Notes from Underground is considered to be one of the first works of existentialist literature.