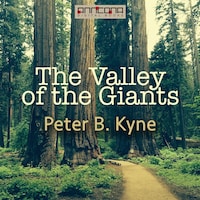 The Valley of the Giants

The Valley of the Giants is a 1918 novel by American author Peter B. Kyne.

In Kyne's Humboldt-inspired novel, a timber baron's wife's wish of saving a favorite stand of redwoods and creating a park in the middle of a city is made possible by her husband after her death.

The man was John Cardigan; in that lonely, hostile land he was the first pioneer. This is the tale of Cardigan and Cardigan's son, the pioneer leader in the gigantic task of hewing a path for civilization. To know the bliss of woman's love and of parenthood, and the sorrow that comes of the loss of a perfect mate; he was to know the tremendous joy of accomplishment and worldly success after infinite labour; and in the sunset of life he was to know the dull despair of failure and ruin.

Because of these things there is a tale to be told, the tale of Cardigan's son, who took up the fight to save his heritage - a tale of life with its love and hate, its battle, victory, defeat, labour, joy, and sorrow, a tale of that unconquerable spirit of youth which spurred Bryce Cardigan to lead a forlorn hope for the sake not of wealth but of an ideal.

Peter B. Kyne (1880-1957) was an American author. Many of his works were adapted into screenplays starting during the silent film era and more than 100 films were adapted from his works.