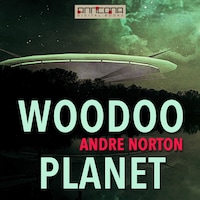 CHALLENGE ME WITH MONSTERS!

”From between the two shuffling dancers padded something on four feet. The canine-feline creature was more than just a head; it was a loose-limbed, graceful body fully eight feet in length, and the red eyes in the prick-eared head were those of a killer.... Words issued from between those curved fangs, words which Dane might not understand....

”Dane slid his blade out surreptitiously, setting its point against the palm of his hand and jabbing painfully; but the terrible creature continued to advance.... There was no blurring of its lines....”

Dane Thorson of the space-trader Solar Queen found himself embroiled in a desperate battle of minds between the rational science of the spaceways and the hypnotic witchcraft of the mental wizard that ruled the VOODOO PLANET.

The story involves two witch doctors who conjure up ghosts and demons against each other. Norton based the wizards’ magic on the use of mildly hallucinogenic drugs, psychological manipulation, and latent telepathy, which place the story within the realm of science fiction.
The sequel to Plague Ship, Voodoo Planet finds the Solar Queen banned from trade and starting her supposed quiet two-year stint as an interstellar mail carrier.

But instead her crew accepts a visit to the safari planet of Khatka, where they find themselves caught in a battle between the forces of reason and the powers of Khatka's mind-controlling wizard.

Voodoo Planet was first published in 1959. It is part of the Solar Queen series of novels.