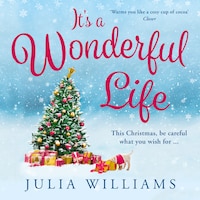 It’s Christmas, and Beth King is preparing to spend it in the bosom of her family, doing the same things they have done since time immemorial: arguing with each other, stuffing themselves silly, putting up with Grandad making them watch the Queen, and having the Family Row by teatime.

Despite having children of their own, Beth and her husband Daniel have never quite managed to escape the horrors of the Holroyd family Christmas. Beth’s mother Mary would never countenance anyone else cooking the turkey. So the family traditions have stuck . . .

But this year, things are going to be just a little bit different. For a start, Beth’s brother, bachelor Ged, appears to have a girlfriend in tow. A very pregnant girlfriend. And her sister Lou, whose car-crash love life could be a boilerplate for every soap opera going, has turned up in floods having been ditched on Christmas Eve – again.

Meanwhile Beth, who has spent years trying to maintain the façade of one completely in control, is facing up to the fact that she has no idea how to deal with either her teenage children or her over-stressed husband. And her hitherto successful picture-book career seems to be on the skids as she tries to get to grips with her newest project, a Christmas book entitled The Littlest Angel.

As the family gather for Christmas Day, childhood tensions resurface, the teenagers bicker, and Beth wishes more than ever that she could hide away and forget the festive season once and for all. And that’s before her parents drop their bombshell . . .