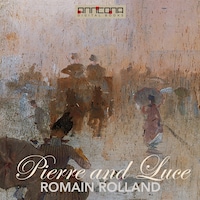 Pierre and Luce is a novel by Romain Rolland, first published in 1920.

Pierre and Luce were an unlikely young pair who found themselves in the chaos of Paris during the war; Pierre, the shy, recently conscripted pacifist, and Luce, the free spirited artist in training, and both confused about the things going on around them.

Why were these war birds flying overhead? Why these warning sirens, and occasional bombs exploding in the distance? Why did the government leaders, who didn't even know one another, hate and destroy so much? Why did these two delicate young adults find each other now?

Romain Rolland (1866-1944) was a French dramatist, novelist, essayist, art historian and mystic who was awarded the Nobel Prize for Literature in 1915 ”as a tribute to the lofty idealism of his literary production and to the sympathy and love of truth with which he has described different types of human beings”.

Rolland's most famous novel is the 10-volume roman-fleuve Jean-Christophe (1904–1912), which brings ”together his interests and ideals in the story of a German musical genius who makes France his second home and becomes a vehicle for Rolland's views on music, social matters and understanding between nations”. His other novels are Colas Breugnon (1919), Clérambault (1920), Pierre et Luce (1920) and his second roman-fleuve, the 7-volume L'âme enchantée (1922–1933).